(vol. 33S, no. 10; newsletter by r.n.)
From the BlackBerry™ of Captain Russ while being stuck in Thurgood Marshall Airport in Baltimore ...
The Pirates won the Sunday Championship against a whole bunch of Pipe dudes, some of the dudes were new dudes too ... (editor's note: In an effort to honor our agreement with ref Scott Baldwin “to say only nice things about him for once” we have edited-out Russ' comments on the handling of the questionable roster situation for the Championship game. We now return to the newsletter already in progress ...) ... as a result of their staffing exercise, the Pipe dudes had 11 skaters and we know how disruptive that can be, so we can thank them for that.

The lines for the big game were Charlie-Tim- Glenn and Tony-Scott-Dan. Defense was Joe-Russ and Darren-Craig. I will admit that I was under the weather a bit and the excellent medication is making my memory of the fine points of the game a bit foggy, but this what I remember ...

Glenn, Tim and Charlie did a lock-down job on the Pipes. Some could say they really gave them the pipe with their relentless play. Glenn made the defensive play of the night by chasing the fastest Pipe the length of the rink and made a diving swipe in our end (editor's note: After this newsletter was written, a videotape has since surfaced showing that the aforementioned Pirate who made this spectacular play was in fact Charlie. We apologize for any inconvenience this might have caused.) The first goal of the game was scored on a nice positional play: Having control in the Pipe zone, the puck made it to Joe at the left point, he threatened to rush than faked a shot and slid it to me at the right point; I first thought about a slapshot, but decided to wrist one about waist high through the screen in front — the goalie was handcuffed and it found the net. Scott and Tony hooked up a few times for scoring chances, but couldn't quite click and Dan had a number of rebound chances thwarted by the quick goaltender.

Our second tally came in the final frame after I contested some Pipes at the point and the puck settled at my feet; I shuffled it to Tony and watched his magic as he stickhandled past two players and slipped a backhander through the moving keeper's legs while being checked by a third frustrated Pipe.

There were a number of penalties called and our penalty-killing was excellent. Both lines had a shot at it and did a terrific job of clogging the middle and keeping play away from Harris. We did break down a time or two, but good team hustle by the Pirates and unorganized play by the Pipes allowed us to escape unscathed. Later, when facing a penalty-kill I was challenging Schueleter ... (editor's note: In fairness to Brian we are granted him “newsletter immunity” for this installment, same as we did with Mr. Baldwin) ... Much to my surprise, Schueleter recognized the bush league level of the Pipe's action and awarded him a dunce cap and another 2:00 minutes. Shortly after this play the Pipes took another penalty and we had a 4-on-3 advantage. We set up nicely in their zone and had a few point blank chances. They cleared the puck and when an inadvertent pass by a Pirate was stolen — and a Pipe scored on a shorthanded breakaway — things got intense. There was still 7:00 minutes remaining and it was a one-goal game. The Pirates, however, regained their composure after the mishap and gave up few chance at even strength for the remainder of the game.

Unlike our previous match with these guys, this game was played in a pretty clean yet hard fashion without any significant altercations (except for Craig's two indiscretions ... not that I usually excuse retaliation penalties in Playoff games, but Craig deserves the benefit of the doubt as he did take an especially nasty crosscheck to the lower back after doing a pretty clean job of moving a player from the crease).

The Pirates found a way to use their heads to win another Championship. Hats off to Harris for his excellent job of goaltending, but also his roster management. Our new players were great, old guys were steady and dependable. Super-subs played a big role this season with numerous absences and injuries. As a result, this was a victory for the Coastal Pirates hockey club rather than the Coastal Pirates hockey team!

FOR THE RECORD*
Attendance (players): Russ, Ralz, LeMatty, Anthony, Glenn, Gucci, Kevin, Joe, Charlie, Craig, Dan. Net: Harris
Scratches: None
Scoring: 1st period: 1-0 Pirates: Goal by Russ (Joe); 3rd period: 2-1 Pirates: Goal by Tony (Russ)
*The accuracy of these stats are not guaranteed since they have not been reviewed by Brooks.
date of game: 6.15.08 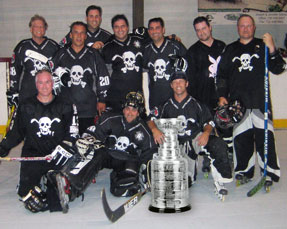 CLOSING IN ON THE CANADIENS ...
The Pirates pose with Lord Stanley's Cup for the 20th time in franchise history. (Ironically, absent from the photo is Playoff MVP Anthony Toscano.) The Championship vs. the Pipe-Down Dragons pitted the No.3 and No.4 seeds — both of which had upset, come-from-behind wins in the Semifinals. The last time the Pirates faced the Dragons was in the final game of the regular season where blood was shed — literally. The first year franchise Dragons declined to return to GoodSports after the loss. 'Nuff said.

1) RUSS NICOLOSI
For the first tally of the night, assisting on the GWG and captaining the crew to victory.

3) DARREN GUGGLIELMELLI
For his great defensive play that kept the Pipes at arm's length.

AND THE WINNER IS ...
In the wake of the victory the polls opened on the voting for the season's trophies. Check out the winners, including the Conn Smythe for Playoff MVP. Click on the trophy below to view a larger image of the custom-engraved Cup.