(vol. 33S, no. 2; newsletter by r.n.)
editor's note: #99 filed this special report Live from the Beacon Theatre in NYC, with the “inspiration from the Superman himself, Ray Davies of the Kinks (and Tim 'Ralz' Hand).”
The new look Pirates played to their potential this past wednesday as they beat the team with the wild name that looked like the old Tile Cutters. This new team was led by a guy wearing a cool retro Whalers shirt, I remember because he blew by me a few times including the first goal about :08 seconds in. We countered with a quick goal and played very well for the most part in a game that was pretty even. Joe Lyden and Tony showed their stuff ...

Joe had the pretty goal of the night with an end-to-end rush and a finish high over the keeper's catching glove. We survived a late flurry of activity with some stellar keeping by Harris. We will have to be a little more careful with the puck and covering for our rushing “D,” Joe and Kevin. We got caught a few times with only one player back. This has the makings of a very good team. The line of Tony, Charlie and I clicked all night and the line of Glenn, Dan and Tim outworked their counterparts every shift ... If we start playing a little tighter and cover for the penetrating defensemen, I see no reason why we shouldn't have a great shot to win from here out.
date of game: 4.06.08 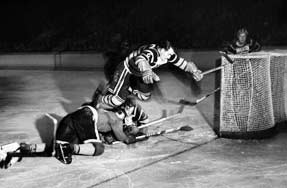 THEIR RECORD IS HISTORY
While retrieving the puck from our net, referee Scott Baldwin informed me that the tally by the Pipe-Down Dragons at the 21:52-minute mark of the 1st period broke the record for “Quickest goal ever, formerly held by the Carnasie Brothers of Sheepshead Bay back in 1952.”

2) KEVIN MCLAUGHLIN
For the 2-point night.
(Have you noticed that since Kevin stopped playing full-time we've been seeing him a lot more? Go figure.)

2) HARRIS
For some good plays (not counting the goal off the opening face-off of course).