WEDNESDAYS #1 vs. TEAM ONE:

(vol. 33W, no. 1; newsletter by d.c.)
editor's note: The Pirates website is a huge supporter of freedom of speech — we've rarely, if ever, had to censor newsletters that appear on this family-oriented site. Still with guest columnist (and subbing goalie) Doug Collimore authoring this installment, we felt compelled to “adjust his wording slightly” to keep more in the spirit of the newsletters and prevent Dave (#67's son) from getting further grounded by using Doug's passionate phraseology. Therefore your friends at coastalpirates.com have substituted Doug's colorful language for Bob Brooks with the phrase “what an impartial observer might call potentially unsportsmanlike.” So whenever you see that wording you can feel free to substitute your own thoughts — or you can just ask Doug, who I'm pretty sure will be forthcoming with what he really wrote.

The game started-off great right from warm-ups. I felt good after ten weeks off.

We started with a quick goal by #68 (LeMatty) after crashing the net, and then Baio sent a pass from in front of our goal across both blue lines right on #68's stick who deked the goalie for a 2-0 lead. The Pirates held that lead for only a few minutes. Collimore let a hard slapper hit his sick as he was off balance and it trickled in. A quick 3-on-1 rush made it 2-2. Then the Pirate defense sat on the bench for about 5:00 minutes. A Brooks breakaway that left Collimore without his jock strap, and a very accurate pass across the crease, ended the 1st period scoring at 4-2.

The final period started where the first one left off. A quick Team One score made it 5-2. Then the Pirates got pissed (besides Brooks just being what an impartial observer might call potentially unsportsmanlike). I like playing for the Pirates when filling-in for Harris because they never give up. A goal by #97 (Evan) made it 5-3. A couple of key saves including a 2-on-1 with a kick save kept the score there. A tally from #28 (Scooby) with less than 3:00 minutes remaining made it 5-4. The goalie pulled, less than 2:00 minutes to go, and the Pirate barrage of shots continued. Unfortunately, everything either went into the Team One's goalie or over the net. The horn sounded with Team One victorious 5-4.

Brooks is still a traitor and took a slap shot on Scooby who went down to stop a shot, which makes him what an impartial observer might call potentially unsportsmanlike!!
date of game: 3.05.08 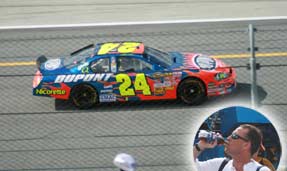 A DAY AT THE RACES
When not trashing #12, Doug can be found at Nascar events cheering on his favorite #24. Above, Jeff Gordon races while Collimore (inset) swigs at the Daytona 500. Coincidentally Doug proposed a new Pirate motto: “Great game, should have won, but we still got beer!!!.”

1) SCOTT LEMATTY
For his two goals.

3) EVAN MILLER
For the tally.