(vol. 33W, no. 9; newsletter by h.s.)
On a rainy, miserable Monday night the Coastal Pirates came to play the first of their two Consolation games. As if that wasn't bad enough, the Land Sharks were a no show — at least most of them. With only three regulars in attendance they quickly recruited Brooks and scorekeeper-guy. A 12-year-old filled-in for Bob reffing and did (by GoodSports standards) a surprisingly good job.

The game was officially a “forfeit” so for the record the Pirate logged their third win of the season. After an eternity of Victor being lit-up by the Pirates offense, which switched goalies, but here are some highlights of the game: I stoned Brooks every time (he'll probably dispute this, but hey, he ain't writing this). Mike had a smokin' one-timer (against me of course). Russ scored about 12 goals (none of which counted unfortunately). On a breakaway, Russ was whistled for an offsides by the aforementioned ref — his reaction was priceless. #67 scored a goal that I managed to pull of the net before the fill-in ref saw it. But the most unlikely event occurred after the game when — and I'm not making this up — Mike drank a Pabst at the post-game “meeting.”

Since the other details are hazy, coastalpirates.com is proud to bring you “The All-Jim Dowd team.” For those of you living in a cave, Jim is the local hockey hero from Brick and during his 16 NHL seasons has played for 10 teams — more than any other American-born player in the history of the league. For our new issue of 40º74º magazine I was able to do a photoshoot with Jim at the Wachovia Center where we posed him in all 10 of his different sweaters. You can download the layout and read his interview — pretty funny! 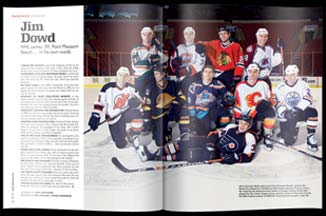