(vol. 34S, no. 10; newsletter by r.n.)
editor's note: Russ writes the final word on the '08 Summer season via his Blackberry™...
The Pirates got a second shot at life this past Sunday when roster violations by the Bruins disqualified them from their victory in the Semifinals and landed the Pirates in the Finals. This whole experience is eerily similar to the latest Pirates of the Caribbean movie, “The Black Pearl” (where they travel to Davey Jones' locker and come back from the dead). The correlation to the movie doesn't stop at the surreal return from the dark side though, because Jack Sparrow looks a lot like our dashing goaltender and his signature Pirate do-rag. 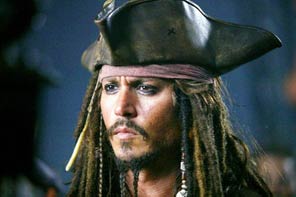 The game was pretty ugly to be honest. The Pirate crew hung in there for most of the 1st period, but a number of defensive breakdowns by the club as a whole cost us the Championship. Most noticeable to me was the tremendous gapping that occurred giving control of center ice to the Bulldogs as our defensemen had no place to outlet the puck and ended up trying to rush it, dump it all the way down or hit a long pass. Most times it just ended up as a dump-and-chase game. Unlike grinding Pirate teams of the past, this is a more skilled group which really doesn't excel at the mucking in the corners and scoring ugly goals. The one notable exception would be Glenn Farkas, who mucks with the best of them; he gave it his all, but really didn't find anyone with a pass the few times he won the puck. Tony battled in the corners as well, but to say he was being tightly checked would be an understatement. Let's say that coverage was so tight that I was told the post-game pregnancy test came out negative. The refs were a bit sadistic and most have been enjoying themselves as it seemed they forgot to raise an arm and blow their whistle during the actual rape scenes. To be honest, that had little to really do with the outcome — our play did though.

For the most part, the Bulldogs did a nice job of quickly gathering the puck and getting it out of the zone before we could keep any sustained pressure on them. As usual there were a few spectacular rushes by Kevin, Joe, and Tony, but unlike most nights we couldn't find the net or even a rebound to put in the net. Our frustration was obvious to even the most casual of fans as was stated to me by one of those spectators that “you looked like five guys skating around that happened to have the same jersey on.” I think that pretty much sums it up.

Congratulations on a great season, condolences on an ugly ending.

FOR THE RECORD*
Attendance (players): Russ, Dan, Tim, Lyden, Toscano, LeMatty, Kevin, Gucci, Glenn. Net: Harris.
Scratches: Mike (AWOL).
Scoring: 1st period: 4-2 Bulldogs: Goals by Lyden (Toscano); Hand (none) PPG. 3rd period: 7-4 Bulldogs: Goals by McLaughlin (none); Lyden (none), extra skater.
*The accuracy of these stats are not guaranteed since they have not been reviewed by Brooks.
date of game: 9.14.08

1) JOE LYDEN
For 2 tallies, including one in the opening minute.

2) KEVIN MCLAUGHLIN
For getting mad and getting even — he scores a topshelf slapshot immediately after being roughed-up by a Bulldog defenseman.

'08 TROPHIES UNVEILED
Although the season ended on a down note, the Pirates put together an impressive 7-1-0 regular season record — enough to secure the No.1 Playoff seed and win the President's Trophy for best regular season performance. Check out the winners of the trophies awarded for the play during those 8 eight games as recognized by fellow teammates.