(vol. 34S, no. 3; newsletter by h.s.)
The Coastal Pirate machine roared to its third straight win, mercying the Cannibals halfway into the final period. The win was the second “mercy” and third straight shutout. The Spring Champs have now outscored opponents 21-0.

With our Captain out 2-4 weeks with a torn calf muscle, I was left to organize the lines (and write the newsletters). With a wealth of talent at my disposal — including a defensive corps that even the Red Wings would envy — the job wasn't too difficult. Tim centered Tony and Glenn, while Dan centered (our full-time sub) Marty and LeMatty; on defense were Kevin, Mike, Gucci and Joe Lyden.

At the start of the 1st period, Kevin gave us the quick 1-0 lead. Then the quick 2-0 lead. Glenn Farkas, returning from the D.L. looked sharp as he added goals three and (a powerplay tally) four. With just moments remaining in the 1st period, Kevin did a Nintendo GameCube™ move down the ice and finished his hattrick. An inspection of his stick revealed a legal curve, but tons of stickum on the blade.

“MonaVie” DiPierro continued the surge in the final period when we scored on a delayed penalty (yes, I got off the ice quick enough for once); kudos to the six skaters for patiently controlling the puck until Tony found Dan in front. Shortly after that, Tim “Ralz” Hand banged in two goals on one shift. That would have officially ended the game at 8-0, but longtime Pirate nemesis (and forest fire junkie) Scott Baldwin was reffing and didn't want to give our goalie the shutout just yet. So play continued for :30 seconds more, which was just long enough for Tony to take the puck up the wing and tuck a wrister beneath the crossbar. At that point Mr. Baldwin realized he best call the game. Little did he know the disappointment that he'd set in motion when Tony — like a kid losing his choo-choo on Xmas morning — was stripped of his goal because the game was legally over ... but seriously, I probably shouldn't antagonize our Playoff MVP from last season because we play his Rat Pack this week.

Speaking of playing the Rat Pack this week ... now seems an appropriate time to remind Pirate rostered players of the S.O.C. policy towards playing on multiple teams: “If thou playest on two teams that findeth themselves in battle against one-another, then the Pirate player must don the Pirate colors for said outing. This meaneth you — Tony, Joe and Gucci.”

2) KEVIN MCLAUGHLIN
For the hat. Still in 3rd, but gaining on Mr. Brooks. Kevin has notched one-third of the Pirate tallies this season.

3) GLENN FARKAS
For his 2-goal return to the line-up. Not bad considering he was helped off the ice two weeks ago. 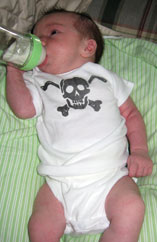 FIRST MATE
Michael “Lil' Ralz” Hand replenishes his fluids after a practice with our AAA-team in Piscataway.