(vol. 34S, no. 7; newsletter by r.n.)
editor's note: After a month-long hiatus due to injury, our Captain was back in the line-up this Sunday. He authored this newsletter via Blackberry™ from from “the beautiful Wilmington Courtyard Marriott”:
On the nicest day of the Summer it was a great night to come back and play with the Pirates. I got a few notes from guys while I was out and want to say thanks.

The club came out in terrific form and controlled play from the opening drop of the puck. I received a nice pass from Scott early in the 1st and surprised the keeper with a wrist shot five-hole. We continued to apply pressure and had a number of good chances. Kevin, fighting through a leg injury (that he acquired at his victory in State Wars), skated into the offensive zone and made the first of a number of exquisite passes. Wildman was parked at the near post at a nearly impossible angle when Kevin slipped him the puck. John made a one-time tip that slid inside the far post. Unfortunately, we got a bit complacent and allowed the Ducks to get back into the game and tie the score by the end of the period.

After a few minutes of soul searching the Pirates came out and shutdown the Ducks. We regained the lead when Kevin skated down the right wing and drew three players to him, at the last minute he slipped the puck to me as I broke to the net and deposited a one-timer. Glenn and Craig closed out the scoring in what was a very nice 5-2 win.

A few interesting plays of note included a great glove save and an even better blocker save on a breakaway by Harris. Mike Farrell showed off his poke check skills on a number of occasions and Gucci nearly killed a Duck who wisely avoided the oncoming freight train.

It is clear by anyone watching my skating that my leg needs some more time so I will be out for a few more games so that I don't miss the whole Fall as well. I understand that Joe Baio will take my spot and anchor us to Playoff victories.

1) RUSS NICOLOSI
For his 2-goal effort in his return.

2) CRAIG GRINBERG
For subbing on 1-hours notice (this violates Craig's “2-day rule”). He was solid at the blueline in-between selling money market accounts to his teammates.

3) KEVIN MCLAUGHLIN
For his 3 helpers. 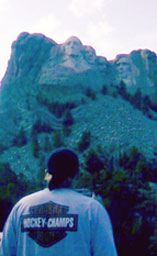 “KRUISING WITH KEV!”
#3: RUSHMORE
This is the final installment of our cross-country photo feature of Pirate blueliner Kevin McLaughlin's journey to the Sturgis motorcycle Rally and State Wars. We'll be having a fundraising effort this Fall to buy Kevin a new friggin' camera so we can see the actual landmarks on his next trip.