(vol. 34S, no. 8; newsletter by h.s.)
The fact that the Pirates “held on” to capture the final game of the regular season seems ironic given the circumstances. This last game not only pitted the No.1 (us) and No.8 (them) teams, but the Jags had been a victim of a Pirate “mercy” way back in game 1. Still, “held on” is what we did. (Although Kevin would later analyze our style of play on this given Sunday as “#%@&*# hockey.”) But a win is a win, and this particular win capped a 7-1, division-winning season.

With only nine skaters and Gucci running fashionably late, the lines were a bit confused to startThat, combined with their goalie standing on his head, meant the Pirates snuck out of the 1st period with only a 2-0 lead on goals from Tim and Glenn.

In the final period we couldn't get much going either. An errant hail-Mary attempt to Kevin was intercepted by (of course) their best player who quickly top-shelfed it to cut our lead in half. That was our wake-up call as we realized that one more bad bounce could cost us the game. After that, we killed-off a Farkas high-sticking penalty and played some good team defense in the waning minutes to take the win ... or, more correctly, “hold on” for the win. (In retrospect the decision not to let Schueleter play for the Jags turned out to be a blessing.)

Our Semifinals match will be against the Bruins and our Captain is slated to be in the line-up for that one. Hopefully that'll help jump-start our offense that has been a powerhouse all season and give us the opportunity to repeat last season's Playoff heroics.

FOR THE RECORD*
Attendance (players): Dan, Tim, Lyden, Toscano, LeMatty, Kevin, Gucci, Glenn, Mike. Net: Harris
Scratches: Russ.
Scoring: 1st period: 2-0 Pirates: Goals by Tim (Farkas); Farkas (Toscano). 3rd period: 2-1 Pirates: None.
*The accuracy of these stats are not guaranteed since they have not been reviewed by Brooks.
date of game: 8.25.08

1) GLENN FARKAS
For his 2-point night.

2) TIM HAND
For the first tally of the evening.

3) JOE LYDEN
For his wonderful job of repacking the cooler to accommodate the Molson 12-pack that he and Tony paid their “fines” with. 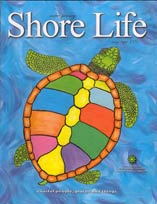 HOT OFF THE PRESS!
Publisher Scott LeMatty brought copies of the new, New Jersey Shore Life to the post-game “meeting.” The issue was a big hit, but we're not sure if that's because of the content or the somewhat racy ads (see pages 10, 26 & 27). In an unrelated matter, the S.O.C. is investigating LeMatty for potential logo infringement on page 55.