(vol. 34W, no. 10; newsletter by b.n.)
Perhaps it was the fact that they had handled the Hurt with such ease the prior week. Maybe they were taking the Jags just a little lightly. Then again, it could be that Marty wasn't there. Heck, I heard one of the Pirates say prior to the game, “Let's just Mercy these guys in the 1st period and get it over with.” (For those that are wondering who said it, let's just say that he wears the number that has both the current month and the current year in it.) But whatever the reason, the Championship game started with a much different feel than then the Semifinals ended with. Where was the blow out? Where was the party? Where was the 10-0 Championship tee-shirts?

By the way, that is the one thing that the Coastal Pirates and the New England Patriots had in common prior to the start of this game — they both had had undefeated regular seasons and then both lost in the Playoffs to spoil their bid at perfection. (For those that were wondering, those unfortunate Pirates were bounced in the first round of the Playoffs after a perfect season few years back.)

This night, the game was 0-0 for the longest time. At the break it was still 0-0. Almost 10:00-minutes into the final period, it was still 0-0. Both goalies were coming up huge. Harris made some great stops (even though he cracked his Playschool™ hockey skates that he uses the previous week) and the goalie for the Jags had Kevin's number and stopped him on some great changes.

The deadlock was finally broken by a nice deflection by LeMatty on a Joe Baio shot at the 16:00-minute mark. Ten minutes later, Mike gave us a little cushion when his shot from the point got through. And, alas, Kevin finally solved the goalie when he iced the game with a top shelf backhand with less than a minute to go. So it looks like the Pirates will be sporting those 10-0 tee-shirts after all ... unlike the Pats' 19-0 tees that were last seen somewhere in Zimbabwe. 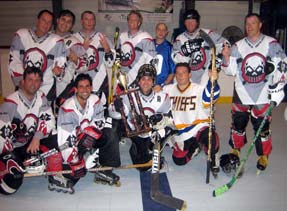 PERFECT ENDING TO THE PERFECT SEASON
It's hard to believe that a season ago this Pirate crew didn't qualify for the Playoffs. For the Summer, however, not only did the team redeem themselves by capturing their division title but they accomplished something never done before in franchise history — an undefeated season capped with a perfect Playoff run. Evan (back row, middle) was on-hand to support his teammates for the historic game.

1) SCOTT LEMATTY
For the game-winning, title-winning tally ... and for remembering the limes at the post-game “meeting.”

2) MIKE FARRELL
For the insurance goal.

3) HARRIS
For the shutout in the Finals. (Second time in Pirate history, baby!)