(vol. 34W, no. 8; newsletter by b.n.)
Don't forget: This week is a “bye.”
That means, for some of you, you don't have to worry about racing from work to the game.
For others, you don't have to interrupt your AC excursion.
For Wildman?
Well, he is saved the embarrasment of showing-up on Wednesday night when the game was actually on Monday (the rink does that to us from time to time).
And for me?
I won't have to worry about writing the newsletter.
(not that I did this week). 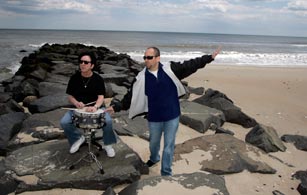 PETER CRISS UNMASKED
Founding Kiss member Peter Criss (in black tee) with Pirate goalie Harris (in Pirate jacket!) during a Spring Lake photoshoot for 40º74º magazine. The former Kiss drummer and his wife Gigi live in Monmouth County and Peter is the cover story for the August issue. After the shoot I gave them Coastal Pirate keychains and, believe it or not, they were psyched and said they were going to carry them with them. Now, how cool is that?!
[ read the magazine story / click here ]

1) HARRIS
For the 1.66 g.a.a. on the season and the solid outing — thanks for the nominations, fellas. Got this nice email from Tony, who was playing for the Cannibals, after the game: “hey harris, had to leave last night, didn't get a chance to tell you #1, your a jerk for making me look stupid on several occasions and #2 how good you played ... great job last night!”

2) SCOTT MILLER
For great offensive defense (and the goal). Scott finished the season tied with Kevin for most goals (8).