(vol. 35S, no. 7; newsletter by r.n.)
The Pirates met up with their old friends the Jags on Sunday night for a relatively lively and friendly renewal of the decade old rivalry. Gucci was absent to the South so Joe Baio stepped into his spot and played stellar defense as usual. I was paired with Joe while the other pairing on defense was made up of the dream team of Mike and Kevin. On offense, Dan forgot his magic juice on his hunting trip and called in for relief when all the mountain climbing got to him. So the lines were Tony-Jay-Charlie and Scott-Tim-Glenn.

Harris looked great between the pipes — very stylish — and he played well too ... including a number of breakaway saves.

Our first goal was scored when #67 (doing his usual chameleon thing by playing with the Jags on Sunday), got the ultimate embarrassment of having me lumber by him and slide the puck to a breaking Tony who circumvented the sprawled tender and adroitly deposited the puck in the net. The game stayed that way until the period break as the Jag tender was super and we missed the net a lot.

The final period start must have broken the hearts of the Jags a bit. Kevin took a page from The Mighty Ducks playbook and used the dreaded “knuckle puck shot” from the point. It bounced in front of the keeper and found the cords. This was especially cruel as the Jags keeper had stopped a number of blasts from Kevin prior to this goal. At this point, the Pirates were able to take advantage of the Jags desperation to get back in the game with a few more nice goals. The game was a bit closer that the 5-0 score would indicate. Harris was tested a number of times and came up big and Joe Baio had a save or two as well.

Interestingly, Scott Baldwin once again complained about not being mentioned on the Pirates website so I am breaking that long standing tradition and going out on a limb here and stating that Scott apparently blew the call on the no-goal on the nice give-and-go play by Tony and I in the 1st period. The Dream Team said that they had a clear view from the bench and the puck went in. I hope this mention satisfies Scott's desire for publicity. As for Vic, I was told he was there, but I can't confirm that. I was told that when he was asked by Scott for help on the ruling on the goal, he apparently said, “huh?” 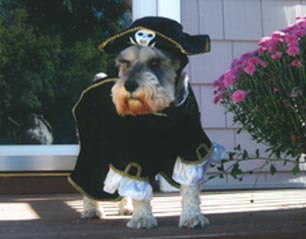 NEW MASCOT NAMED
“Captain Ballsteen” (known as Mitch to his friends) was inked to a 1-year deal as the official mascot for Coastal Pirates Hockey. Mitch replaces our beloved “Bill the Deer” who was slaughtered earlier this week by Gucci and is now being served-up with a nice gabagool by Danny.

1) ANTHONY TOSCANO
For his 2-goal, 3-point night including the gamewinner in the 1st period.

2) MIKE FARRELL
For a diving save on defense to save a breakaway late in the final period. (As nominated by Scott Baldwin)

3) TIM HAND
For some great two-way play and nice moves on the boards to keep the puck out of enemy hands.