(vol. 35W, no. 10; newsletter by b.n.)
You know, its been a long time since AC/DC toured the United States. How many years? I really don't know. Maybe it's only been a year or two, but I am too lazy to look it up. I would think that since they just put out their first album in eight years, its probably been a number of years since they toured.

So with that in mind, we can give Scott Miller a pass for skipping the game to go see AC/DC. Marty on the other hand ... not so much. Geez, Marty had the second most points on the team (9 to Kenny's 10) and he's a no show for the Championship game? But speaking of Scott, if you add his goal totals to Marty's (it's like 10 between them) and you compare that to the number of goals scored by the whole team (about 30), it doesn't take a math major to determine that between the two of them they scored 1/3 of the teams goals! And neither of them are at the game! What idiot on the S.O.C. approved them both attending this concert? Shouldn't they be treated the same way as other important executives? (Like when the dudes from Coke that know the secret formula are not allowed to travel on the same airplane flight, just in case the plane goes down and takes the formula with them.) Any other season, this probably wouldn't have been a big deal, but since Joe Baio was the only approved sub (and the Pirates always play by the rules), the Pirates ended-up playing with a shorter bench then normal. (editor's note: League rules now specify you must play in four regular-season games to be eligible for the post-season. Unfortunately Mike, Kevin & Nick Campanale played only two and Bob Currao only one during the season.) And the Cannibals took advantage of it. They seemed to control the majority of the play in the 1st period, but they still came away only leading 1-0 on a goal by Sunday Pirate Tony Toscano.

The Pirates made some minor tweaks (switching #99 back to “D” and moving #67 to “O”) but it didn't seem to matter as the Cannibals made it 2-0 early in the final period. The Pirates seemed to get it going later though as Wildman fed a pass from the left wing that deflected off Kenny's skates, and then #67 put it past the Jags (whoops I meant to say the Cannibals) goalie. On the ensuing faceoff, Scott Lematty skated through everyone and buried the puck to make it a 2-2 game.

After surviving the previous week in overtime, it looked like we were heading there again until Farkas (unfortunately not the Farkas that normally plays for the Pirates) scored. That gave the Cannibals the lead with 2:13 left in the game. The Pirates tried hard, but couldn't pull off the comeback this time ... 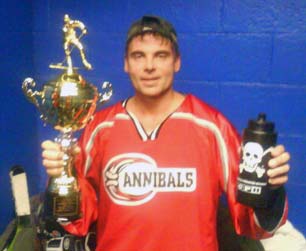 THE SPOILER
Former teammate Bobby Farkas proved to be the Pirate killer on Wednesday as he scored the gamewinner and spoiled our bid to go back-to-back as Wednesday Champs. In this image, taken by Anthony “I'm a Dick for Taking this Photo and Texting it to Harris after the Game” Toscano, Farkas proudly displays the Championship trophy and his Pirate bottle he earned when he played for us a few seasons back.

1) BRIAN NEWCOMB
For the first goal of the night.

2) SCOTT LEMATTY
For a thrilling game-tying goal on the shift after #67's tally.

BALDWIN BLASTS BACK!
I have recently visited the Pirates web site to view a recent article and what I find instead is a public bashing directed at a 13-year VETERAN OFFICIAL!!!!! My record dating back to my rookie years at Jackson and Eatontown hockey to my present tenure at Goodsports is IMPECCABLE!!! How dare this so called columnist (Brian "No Brain" Newcomb) attack a man of my stature and position in the hockey community across the globe. Then I stopped and thought for a second, look at the SOURCE!!! This closet columnist, who by the way has failed in all media endeavors for the local news joints, and recently has been turned town by the APP, for God sakes they hire any sch***k that walks in the door. So now that we have a little understanding of what kind of mental capacity our subject has, we should move on this his hockey ability and knowledge.

A recent poll done around the league brought back these results:
• 97 out of 114 players do not know who he is • Out of the 17 players that do know him: 9 of them are Coastal Pirates and 6 of them have know him from perfect passes on the tape to them (the other team) and the last 2 were paid in Coastal Pirate merchandise to say they knew him.

His column can be compared to his hockey game:

Lesson for the day CHECK THE SOURCE!!! I WILL NOW TURN THIS defamation of character LAWSUIT OVER TO MY LAWYER.
— Baldwin