(vol. 35W, no. 4; newsletter by b.n.)
Well, it took a little while, but the Pirates finally got rolling. For the second straight week, Harris pitched a shutout, while KennyG enjoyed his first multi-goal game when he netted a pair of goals to balance the pair scored by Scott Miller. Scott LeMatty also added a goal as the Pirates cruised to a 5-0 shutout.

Mike Farrell was there again too (filling-in for Bob Currao who, even though he is on the roster, has yet to make an appearance on Wednesday night). Mike proved that he didn't read last week's newsletter when he complained that there were not enough Coors Lites™ available after the game. Come on Mike! Get with it, the market has dropped below 10,000 — its time to tighten the purse strings. The Pirates need to start cutting back on expenses.

On a scarier side note, more than one Coastal Pirate was having trouble with simple math: One of them tried to convince the team that the population of the United States was 3 million .... Another tried to find the average cost of a Pabst Blue Ribbon (if a 30-pack costs to 20 bucks .... no, its not $1.50 a can). Geez no wonder the country is in such financial ruin. 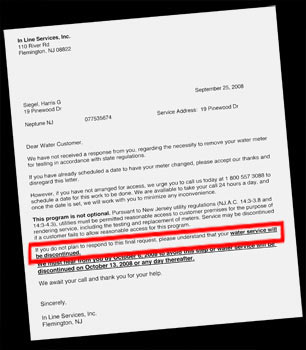 FINAL NOTICE
I arrived home one day to find an InLine services notice on my door that my water meter needed changing. As you might know, InLine is Brian's company and he has the contract to change these meters. Well, before I had a chance to decipher the illegible writing and arrange an appointment, I received the above letter in the mail saying that my water service would be disconnected. Very funny Brian. — Harris

1) KEN GENALO
For the GWG and a 2-goal, 2-point effort. (Congrats to KennyG on his first “Silver Skull”!)

2) SCOTT MILLER
For his 2-goal night.