(vol. 35W, no. 9; newsletter by b.n.)
I hate to admit it, but for some reason, I was not paying a whole lot of attention to the Wednesday night hockey season this year. As the season came to a close, I never really put too much thought into it — never looked at the standings. Sure, I wrote the newsletter every week, but in the end I had no idea where the Coastal Pirates stood in the standings. (Kevin would be quick to point out that while technically #67 did “write” the newsletter every week, he spent more time writing about Aliens and Sasquatch then any real game action, so no wonder he can't remember anything.)

So, with that said, I kind of assumed that going into the first round of the Playoffs, the Coastal Pirates had secured the No.1 seed (in the “B” division) and were playing against the No.4 seed. Hey didn't we just go undefeated last season? Anyway with those thoughts in mind, it is not hard to imagine that I was somewhat surprised that the Bottom Feeders were hanging with us.

It took something like 12:00 minutes into the game before Gucci finally picked-up the puck and deked everyone on the Bottom Feeders (including the Goalie) and put an effortless backhand into the net for the 1-0 lead. Yeah boy! That's what I'm talking about! I was also thinking that now that Gucci broke the ice, the Pirates were just going to unload on the Bottom Feeders and put the game on ice. Of course, I was wrong ... to my surprise, the Bottom Feeders were not only able to hang with us, but they were able to tie the game (another goal by Gucci) before the end of the period.

No big deal, I thought to myself, we'll take them in the final period.

But we didn't do that either. In fact, if it wasn't for some spectacular saves by Harris, the game (and the season) would have been over.

It actually wasn't until overtime until a thought occurred to me: It was “Holy $##@!, we could lose this game.” But then as the seconds were counting down another thought came to me (as I quickly surveyed the skaters on the rink): “How many shooters would it take before I would be called on for the shootout?” But then, just like that, with mere seconds left in the game, there was a scramble in front of the Bottom Feeders net and Marty finished-off a puck from Joe for the (extremely) thrilling overtime win! After the game I actually looked at the standings and I realized that the Bottom Feeders were actually the higher playoff seed than the Pirates — and it was a No.2 vs. No.3 showdown — not the No.1 vs. No.4 that I assumed. (The website had the Pirates listed as the No.2 seed, but both teams were tied with eight points and the Bottom Feeders had more wins so they technically should have been the No.2 seed.). So now I know why they were such a tough opponent.

Oh yeah, and Russ told me after the game, “Don't worry Bri, we would have called Harris' number before yours if it ever went to the shootout.” 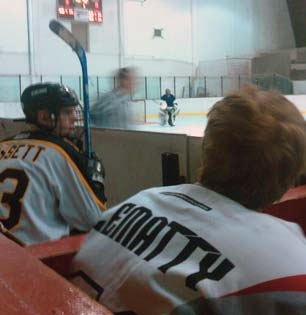 CAUGHT IN THE ACT!
In this exclusive image, Scott LeMatty is shown clearly violating the “wearing the team jersey in a non-Pirate sanctioned game” policy. To make matters worse, Scott is in the penalty box after singlehandedly beating-up the entire Buckshot team. That outta do wonders for the team's image.

[ tell Scott what beer to pay his “fine” with / click here ]

1) MARTY MACCANICO
For the GWG in OT.

2) JOE BAIO
For stellar defense and the big assist on the gamewinner.

3) HARRIS
For giving-up only one goal — to Gucci.