(vol. 36W, no. 1; newsletter by b.n.)
I got a phone call from Greg Schiano the other day (that is one of the perks of being an alumni). while I can't divulge the actual conversation that took place, I do have to state the following:

4) I am so sorry that I ever doubted the coach.

With that said, its back to business ... The Pirates opened the new hockey season against the Jaguars (who they played in the first round of the Playoffs last season and, more recently, in the pre-season game just the other week). As it turned out, Harris ran some Jeep into the guard rail on his way to the rink, so a number of us were running late due to the fact that 138 East was shut down. (Somebody claims to have seen Brooks operating the flatbed, but without some type of physical evidence that he was there — like a photograph or the aroma of his stinky hockey bag — I would say that a “Brooks Sighting” would be officially catogorized as “unconfirmed” (Sorry Scott, but you would have been more believable if you had claimed to have seen Bobby Currao operating the truck.)

Anyway, maybe it was because a bunch of guys were out of sorts because they didn't have any warmup, or maybe it was because Kevin was late with no excuse. Whatever it was, it kind of seemed that the Pirates just didn't have it. Not to take anything away from the Jags, but some of their goals were on the flukey side, but that is the way it goes I guess. The Pirates made it exciting at the end however, trailing 4-3 with Harris on the bench and just seconds left; the Pirates crashed the net and it looked like it would be easy pickins when a puck slid slowly across the crease just out of reach from the Jags goalie ... but it was not to be ....

And, oh yeah, I forgot one thing with my conversation with Greg Schiano:

5) No, I had nothing to do with the firing of Bob Mulcahy ... but I am available if you need someone to fill his spot. 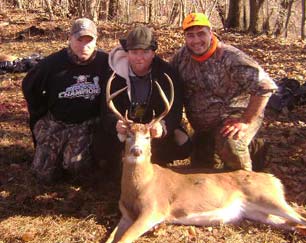 PIRATES 1, BAMBI 0
Kevin writes: “Coastal Pirate hunting team scores a buck!!! Assist goes to Jay Serkin for getting us the intro to his brother in-law who is a ranger and gave us a tour of the park.”

editor's note: The Coastal Pirate organization does not endorse the brutalizing of animals — unless they are playing on the other team.

1) RUSS NICOLOSI
For his 3-point night.
(Assist goes to his new wheels.)