(vol. 36W, no. 5; newsletter by b.n.)
The last time we played the Buckshot: George W. Bush was President ... Gas was $4.00 a gallon ... and the stock market was over 10,000 points. And now? Well, George W. is still the President, but judging on how long it takes me to write this newsletter he might not be by the time you are reading this. And who needs $4 gas anyway? But just to show you how much things have changed, I remember playing the Buckshot and looking up at the scoreboard and seeing: “Commerce Bank.” Well even though the bank is now called “TD Bank” the banner still reads “Commerce Bank,” but that's not the point. The point is that was not the only thing I was looking at on the scoreboard, but rather the 5-1 score. And as most of the four people that are reading this newsletter know, the Pirates were not the team on the “5” side. But then something happened. Some people say that is when the Pirates finally woke up and started playing their game, while other (more informed observers) noticed that the Buckshot stopped taking the easy shots and were trying to score all the “pretty goals.” “So what?” I say to those snobby more informed observers — we'll take the 5-5 tie. So what was different this time? Well instead of a blowout where the Buckshot took their foot off the gas and couldn't pull the trigger at the end, this time the game was a more closely battled affair. Chippy even. (Who would have thought?)

Anyway, after exchanging goals early on tallies from Kenny G, #67, Wildman, and #67, the Pirates were up 4-3. The Buckshot fired back to make it 4-4, then climbed ahead 5-4. The Pirates, not wanting to make the last game look like a fluke, tied the game to make it 5-5. And how much have things changed since the last meeting? This time the Pirates were the ones to pull off the kill shot with :17.8 seconds left in the game. 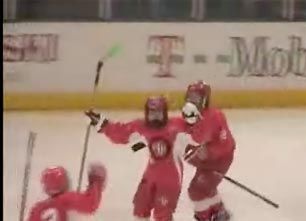 LIKE SON, LIKE FATHER
Our very own Dave (aka #67's son) played on the hallowed ice of Madison Square Garden recently. His team was victorious 4-0 against a team from Québec and Dave tallied two goals. In a related story, the S.O.C. denies allegations that they're attempting to find a place that makes fake I.D.s so Dave can play on the Wednesday night Pirates.

1) KEN GENALO
For the gamewinner with :17 seconds remaining.

3) RUSS NICOLOSI
For his 3 helpers.