WEDNESDAYS #8 vs. TEAM ONE:

(vol. 36W, no. 8; newsletter by b.n.)
editor's note: This edition of the newsletter was dictated from #67 to #29 (aka son Jake). To keep the authenticity of the transcription, we are not altering or editing its contents in any way. Thank you.
The coastal pirates found themselves up against team one a team that includes we'll known pirate killer kevin mcgholan. If the pirates were playing posts they would have won four nothing but unfortunately they were't. Instead they were outgunned by a talented opponent. Even with the loss the pirates ended the season on a high note. Why I said that I don't know I just needed it to make the newsletter longer. The end. 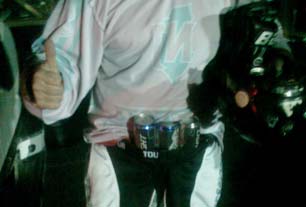 BATMAN'S UTILITY BELT — MCLAUGHLIN-STYLE
In between his second and third game of the night, Kevin dropped by the “meeting” and loaded-up on the Coors™ he'd brought to the post-game. Amazingly he managed to jam about 12 of the 18-pack into his pants, leaving his Pirate teammates to pick-up the shaken debris as they dropped out one-by-one when he skated back.