(vol. 37S, no. 7; newsletter by a.t.)
A note from the author, Anthony Toscano: The following is not reality, it is a dramatically, enhanced, reenactment for your reading pleasure. Thank you.
It was a hot summer day in April ... The Coastal Pirates methodically pour into the hot, sticky arena with one thing on their small, but witty minds — victory. It's what all men going into battle strive for ... a chance to look down at their enemy after they have slain him, peer into their eyes as their life drifts slowly away into the steamy mists of GoodSports.

On this scalding April Sunday, the Pirates had a chance to back the guarantee made by their young, brash, loudmouthed winger: “Playoffs!!!” he said. “We WILL make the playoffs!!!.” The fans, the other teams, even the refs answered: “Playoffs?? You can't make the Playoffs with a 1-4-0-1 record, That's ludicrous!” “Nay!” said they ... “Aye!” said I.

As we donned our armor and went into battle, shoulder to shoulder, with yet still that one thing on our minds. When the battle was over and the dust had settled over the vast sportscourt there was one man left standing ... one man who gave back twice as hard as he took ... one man who braved hell and came out laughing ... the man's name ... Farkas. Like a blaze of lightning he went up-and-down the battlefield scoring goals, backchecking and then scoring more goals. They say he floated over the rink like an angel from heaven, saving the Pirates from certain death (consolation death, that is). When asked about his heroics, he replied: “I'm only a man.” As modest as he is valiant.

Ok, ok ... back to reality. For those who were paying attention and didn't get the irony of these past few newsletters, there are only four teams in our Division. So, in other words, we all make the Playoffs —yay! But Glenny did have two goals, so did Jay and Harris played at a championship level. On a side note, we did not “slay” Team BC, nor did anyone lose their lives on this day, so victory for everyone! 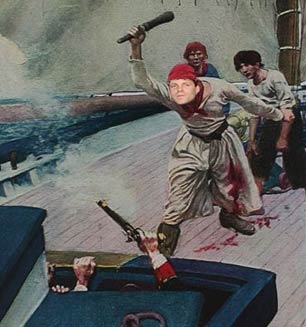 ARTIST DEPICTION: “BATTLE OF THE BC”
Glenn Farkas charges in on Team BC goalie Casey (below deck with gun), while Dave Kurasz and Rob Osa look on. Glenn scored two goals, slayed six, and still remembered to get the puck bag.

1) GLENN FARKAS
For his 2 goals. (There were chants of “Glenn, Glenn, Glenn” coming from the bench area in the hopes he'd get the hat.)

2) DAN DIPIERRO
For his tally in the 1st that gave us a 4-1 lead going into the break.

3) HARRIS
For not passing-out from exhaustion and a few Cam Ward-inspired saves.