(vol. 38S, no. 5; newsletter by b.n.)
The Pirates played like a week ago and after the seventh or eighth email from the S.O.C. demanding that I write the newsletter, I finally sat down to get to it. But it's going to be short because I don't remember much.

Let me first begin by saying, after a week has passed I have no real recollection of the game. I think that we played the Phantoms, but I am too lazy to verify that. Wait, nope, I decided to check and while I am not colorblind like LeMatty (I can in fact remember that it was a red team, it just wasn't that red team ... it was the other red team ... the Cannibals. I know that because I went back and checked the schedule). But that really doesn't matter, what does matter is that the Pirates jumped out to 1-0 lead (#67 took the puck down the right wing and passed it to Rob Trochiano who one-timed a sweet one). After that things get a little hazy. According to Harris, Russ got the next goal on a pass from LeMatty. I think at this point the Pirates were up 2-0, but the Cannibals must have scored to make it 2-1 at the end of the 1st period.

The final period saw LeMatty score on a feed from Russ, but the Cannibals would score as well. The only thing I remember is that at some point there was a scramble in front of the Pirates net. I am fairly certain that at least one of the Pirates' defenseman was behind the net (where he got a great view of this): With Harris on the ground and the puck still loose one of the Cannibals pushed the puck across the crease to his teammate who had a WIDE OPEN NET to shoot at. Said defenseman said to himself, “Its over” — but wait! Out of nowhere, Rob Trochiano comes sliding across and lays out to block the shot ... wow! That would have been the play of the night except for the fact that the Cannibals were able to recover the puck as it deflected into the corner, fed it to the point and cranked a slapshot that clanked off the bottom of the crossbar and went in.

But who am I kidding ... even if that puck didn't go in, the play of the night still would have been the second face-off of overtime. With Tim taking the feed to the goalie's left he at first tried to win the puck backwards, but couldn't quite get that done so instead, with a loose puck still at his feet, he backhanded a shot (or was it a pass) on net that Trochiano was able to re-direct in mid air (while spinning around with the stick between his legs) past the goalie for the game winner. 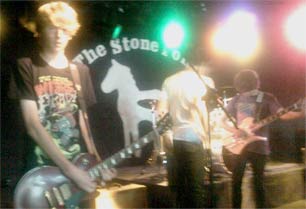 A PIRATE'S LIFE IS NOT FOR HIM
Jake (aka #67's son who doesn't usually attend the hockey games) played at the Stone Pony in Asbury Park recently. Unfortunately, due to last-minute contract negotiation issues, Jake did not wear a Coastal Pirates t-shirt during the gig. Brother Dave (who also attended) had no comment, but did say he did not get served.

1) ROB TROCHIANO
For the overtime GWG.

2) TIM HAND
For the big face-off win and shot leading to the o.t. goal.

3) SCOTT LEMATTY
For his 2-point night.