(vol. 39W, no. 10; newsletter b.n. & a.t.)
A note from Tony Toscano: Last Wednesday was a big win for the Coastal Pirates ... a 3-2 victory in the Championship game that featured good clean hockey and some big time goals. The only problem was ... I don't play for the wednesday Coastal Pirates! I play for the Big Slick, the team with the 2 on the losing-end of the score. Before the game started, I made a bet with Newcomb (your normal Wednesday writer, in case you didn't know) that if we won, I get to write this newsletter ... unfortunately that didn't happen. “So why am i writing it now?” you ask? ... Here is what was given to Harris to post from #67 ...

When was the last time the Coastal Pirates won a Wednesday Championship? I should know, but I don't. I asked Kenny G, and he told me, “I dunno man, I've never won one with use guys.” (note to Harris: Feel free to edit out my attempts at the Staten Island accent. Kenny “carries” sometimes so I don't want to piss him off).

So I asked Farrell the same question and he said, “You know that's really not my name don't you? I am just using Mike's old jersey.” “Oh,” I responded. Then he said, “My real name is Mark.” I was really confused at this point, so I went over to Harris and asked him, “Where is the Marty guy that is supposed to be filling in tonight?” Harris looked at me confused, which of course he does sometimes, and said “He's right over there!” Then he flailed his arms around like he sometimes does and said, “You were just freakin' talking to him!”

I looked back at the dude that I was just talking to and decided it wasn't worth the effort, so I skated over to Tony (who was playing against us on this night) and asked him. “The last time the Wednesday Night Coastal Pirates won the Championship ... I don't know ... let me think about it.” He thought for a while with that silly grin he sometimes wears and said, “I am not really sure, but if I had to venture a guess I would say that it was the last time I played for you guys.” I thought to myself and before I could stop, I blurted out, “Hmmm, I don't remember that ... was I on the team or was that the season I took off to recover from my alien abduction?” Tony put on his angry face (you know the one — the one he gets when you hook him and he falls to the ground and he turns to look at the refs, but they are staring at the ceiling).

“Don't do that Nuke!”(I really had not idea what he was talking about at this point) “Do what?” “That whole 'dot-dot-dot' thing. You can't to that! It's my thing — you stole it from me.” Harris, suddenly appeared and obviously this was some type of pre-determined attack because he was quick to chime in: “Oh yeah,” Harris said, and then did that little arm wave thing he does while he swings his hips around. “That's definitely Tony's newsletter-writing thing.” Then Harris gave his indignant look and huffed out a deep breath, “I can't believe you could do such a thing!” Tony and Harris both stared at me ... I hate to admit it but “You just did it again!” This time Harris used his Long Island hairdresser voice. “Did what?” “You just did the 'dot-dot-dot' thing!” Tony chimed in (he was using his half laugh/half anger voice ) “'dot-dot-dot' thing?” I asked (I still had no idea what he was talking about) I think the two of them were both starting to boil over with anger. Why? ... I don't know.

I looked over at Harris, he was a little more controlled, but his teeth were still clenched, “What?” “You know what, you just typed: 'Why ... I don't know 'dot-dot-dot'!" Tony suddenly screamed so loud that Fred came running from the front desk with the deregulator.“'dot-dot-dot'" Harris chimed in. Russ suddenly skated over, "What are you knuckleheads yelling about?" "Dots, I guess ... I'm not really" At this point Tony suddenly lost it and started skating around the rink screaming “'dot-dot-dot'” ... it took half his team to restrain him, but that was not before he flipped over both nets, smashed half the sticks on his team's bench and stomped one Coastal Pirate water bottle.

Russ looked at Harris in shock, and then said, “Harris, those aren't dots you knucklehead ... their freakin periods!”

... And now some closing comments from Tony: I have several issues with this ... the first: I'm on the other team, so why is my name in here so much?!?! The second, I lost a game to a team with a player so hyped-up on drugs, he probably thinks they are still playing! That letter reminded me of “Dazed and Confused” if they were shooting heroin instead of smoking the high life ... Third, the referenced “...” IS my thing, it's written — go back to the Archives man! I'm officially applying for a Coastal Pirate trademark through the S.O.C. on this one now, hopefully they will remember the above referenced “Long Island Hairdresser” remark when coming to a decision on the matter. Anyways ... here's what happened in the actually game in case you were wondering:

The Pirates got off to a big start with a goal from Eddie and then another goal from Russ to give the Pirates a two-goal lead. Shortly before the end of the 1st period, the Big Slick answered with what one could say was an “interesting” goal. The puck got knocked around the crease between skates and a wave of humanity ... Some how, Greg Grey, of the Slick got knocked-down in front and began what I can only describe as a “Reverse Avery” — laying on his back and kicking-in-the-air as if riding a bicycle in front of Harris ... the puck popped-out to Villa and he put it in the net while Harris was bedazzled by Grey's moves.

The next goal came in the middle of the final period on an end-to-end rush by — dot, dot, dot — me! Splitting two defenseman and going from backhand to forehand and banking one in off of the goalie's back. Thus making the score 2-2.

The final goal resulted from a bad clearing attempt by the Slick onto Marty's stick, who then put it in the net. This was the gamewinner ... Wish I could get more detailed about the Pirate goals, but i wasn't on the rink for any of them ... ... ... :) 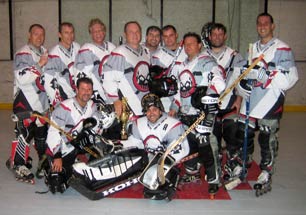 No.24: SAME AS MONTREAL CANADIENS
The Pirates rebounded from a lean Summer season to League Champs in the Fall. With a 6-1-1 record, the Pirates entered the post-season as the No.1 seed and mercied their first-round opponent in the Semifinals. The Championship game however, was not quite as easy as the No.2-seeded Big Slick (featuring part-time Pirate Tony Toscano) made for a nailbiting 44:00-minutes. The Title ties the Coastal Pirates with the Montreal Canadiens for winningnest franchise in hockey history.

2) ED GESIOR
For getting the scoring going with a blueline blast.

3) HARRIS
For lowering his g.a.a. to 1.5 for the Playoffs. And for saving one off his back that Kenny “could've sworn was going in.”