(vol. 40W, no. 3; newsletter r.n.)
Shovel, shovel, shovel. After a day of shoveling out from our record snowfall a hearty group of Pirates showed at GoodSports for a battle with the Bulldogs.

Despite digging hard all night the Pirates could not get out from under the avalanche of offense applied by the 'Dogs. The 5-2 final does not represent the true nature of this game. With the aid of subs Bob C and Joe B the defense was formidable — even with the snowplowing-weary Gucci and Kevin comprising the rest of the blueliners. Offense was manned by the “150 Line” of Scott, Russ and Dan, and the “Kids Line” of Brian, Tim and Jay.

An early pair of goals by Russ boosted our hopes, but the counterattacking speed of the 'Dogs and some great tending by McIntyre thwarted our relentless efforts. We really played quite well and a few untimely turnovers and a few whistle swallowing exhibitions by Vic really did us in. (Rockhill was 3- or 4-feet offsides on his first goal, but Vic said it was not his fault Kevin was playing and not reffing!). Nevertheless, it was a fun, fast well-played game and the black-and-white can hold their heads high afterwards.

Peaceful holidays to all Piratehood. #99. 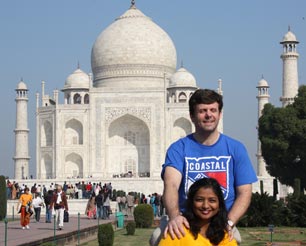 ... AND THEY HAVE $5 BLACKJACK TABLES
Wildman and Priya have made it India. The happy couple is shown here in front of Trump's newly renovated Taj Mahal. John has chronicled his vacation wearing his Piratefest IV shirt and says he will not remove it until “the Sunday Pirates win a game or Brian drinks something besides Pabst.”

1) RUSS NICOLOSI
For both tallies.