(vol. 40W, no. 2; newsletter b.n.)
It's time for me to catch up on some old newsletters. Harris wanted me to keep this short, So without further ado let me just say one thing: If I was ever inclined to say one thing that was very short, I would say that I hate playing on Monday night. Now I am not saying that this particular game was played on a Monday but it might have been. I also might have already written this newsletter, But in going back at what I have written previously, I cannot be too sure. But the game seems to be vaguely familiar to me. Of course it could be familiar to me because I actually played in the game, but — nah — that couldn't be it. The game could have played in the Pleistocene era for all I know.

You know I think I did write this one already. First goal by Trochiano? How many games has he played this season? If it's less than two then I am repeating myself. Which of course I hate. Like “Groundhog Day.” Typically I love Bill Murray movies: “Stripes” ... “Ghostbusters” .... “Groundhog Day? Not so much. And I know Harris is a big “Star Trek: The Next Generation” fan, and that series had an episode that was kind of the same thing but only worse. And if I know Harris, it was probably his all-time favorite episode. In which case he should love this newsletter. Or not.

For those of you that already read this, you already know that additional goals were scored by Miller and Cassens. Did the lead hold? Like I know? I don't of course, I just scroll to the bottom of the newsletter looks at the stats. And what do I see? No, the three goals were not enough, but yes the Pirates won when KennyG got the goal that was needed to overcome the three other goals that were scored in the period.

At least that is what I think happened. Unless it was another game that I was supposed to be writing about, in which case something totally different happened. 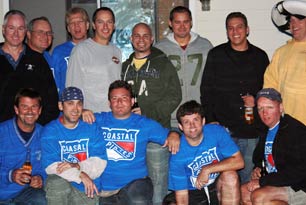 NEXT PIRATEFEST SLATED FOR “CITY OF LIGHTS”
If you haven't seen the pics from this past Piratefest, take a visual journey down Memory Lane and check'em out. Meanhwile this year's host, Wildman (who was awarded the Masteron Trophy this past Wednesday season fo organizing Piratefest IV) is en route to Paris to scout locations for next Summer's shindig.

1) KENNY GENALO
For the GWG.

3) RICH TROCHIANO
There hasn't been a Rob-sighting in ages, but Rich (aka Troch) is back and better than ever.

PIRATE PARTICLE™
LITTLE KNOWN FACTS
The first “Cup” was used in Hockey in 1874 and the first helmet was used in 1974.
It took 100 years for men to realize that the brain is also important.
(Thanks to Rob for this submission!)