(vol. 40W, no. 6; newsletter h.s.)
The Pirates won the last game of 2009 in dramatic fashion, rallying from a two-goal deficit. After a sluggish start to the season (1-2-), the win is the Pirates third consecutive and the second in-a-row that have been highlighted by comebacks in the final period.

The Pirates were down three regulars for this outing, including our Captain and Gucci, but the subs of Marty, Kevin and Joe Baio gave the Men In Black a formidable roster nonetheless. Because of the depth on defense (Kevin-Joe and Ed-Mike), Brian was able to move up and center the LeMatty-Matthews line, while Marty-KennyG-Miller once again reunited up front. LeMatty was fashionably late, however, and it was decided that Ed would move up to forward and Scott would be fined 24 beers for tardiness due to its being the final game of the year.

The Hocky Teem struck first, putting a rebound in just above my glove, but KennyG (with help from Marty) would be the first Pirate to get to double-digits for points when he tied the game 1-1. LeMatty showed-up and the took over up front and the Pirates immediately had a great opportunity off a face-off, but the Hockys were fast and hard to contain and would net two more before the end of the 1st period. Some impressive goaltending in the Hocky net further frustrated our offensive lines and the Pirates would trail 3-1 at the break. Kevin never had doubt as to the outcome however (“We'll beat them.”).

The final period was all Men In Black as LeMatty (assist Mike) brought us within one and then Kevin knotted things up 3-3 on the powerplay. Ed and Scott Miller both capitalized on costly Hocky failures to clear their zone and capped four, unanswered goals by the Pirates. Still, the drama was not over, as the Hockys would win the next faceoff and torpedo (yet another) shot just above my glove to get back within. The last 4:00-minutes were action packed, as the Hockys kept pressing and the Pirates did all the could to keep it out of the zone or down ice. When the buzzer sounded, the 5-4 score held and the Pirates were 4-2-0 on the season. 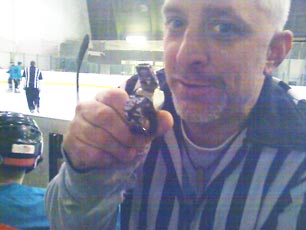 HE DOESN'T BLOW
Referee Scott Baldwin proudly displays his Coastal Pirate-inspired whistle, wrapped in “skull-and-crossbones” tape. Some say he is so proud of his decorating job that he doesn't want to risk spoiling it by actually blowing the whistle during a game.

1) MIKE FARRELL
For his two helpers.

2) SCOTT LEMATTY
He shows up late, but makes a big difference on the scoresheet.

3) DAVE MATTHEWS
For his tenacious display on the “other side” of the blueline.