(vol. 40W, no. 1; newsletter by h.s.)
If the Shoe fits wear it ... and if that shoe happens to catch on your other shoe and you rip the side off and then trip over yourself and drop your equipment all over the sidewalk and a girlfriend of a lacrosse player has to help you up and hand you your water bottle and sticks, then you're just Brian.

Yes, that actually happened to our legendary #67 as he entered the rink for our first game of the Spring season — he even had the scraped knee to show for it, although he was keeping that under wraps in case we needed a 4:00-minute “blood was shed” penalty later in the night.

But let's get to the game where less people were falling down ... In the 1st period, goals by Tim and Russ gave us a 2-0 lead. But the surprisingly youthful looking Jags line-up (which included some notables) didn't seem to completely jell and could only pull within one at break. In the final period, a shot by Jay gave us back the two-goal lead and we did a great job at using up the clock and repelling them at the blueline for the remainder of the night.

Although starting a new season with a 1-0 record is the best you can ask (and places us just two wins shy of shattering last season's total win record), we do need to keep in mind that both our wins in the Winter season were against these same Jags. Next week we face the Lunch Ladies, the team that beat us in the most important game of the season — the final game. 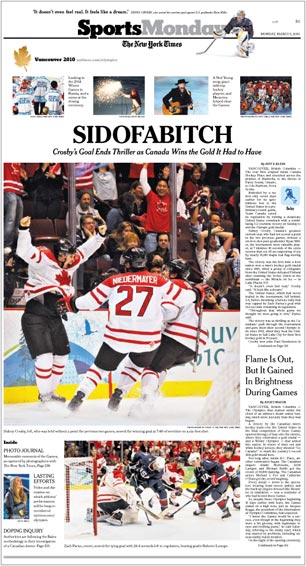 BEST HEADLINE EVER
Team Canada's Sidney Crosby scored the overtime goal against Team USA and gave the Canadians something to be proud of (other than just beer). But I think the most compelling quote to come out of the 2-week Vancouver event was uttered by Pirate Kevin McLaughlin who said:“What the *&#)@# is up with curling?! Everytime I turn on the #*-%$ television curling is on!”

1) RUSS NICOLOSI
For playing hurt (on the first shift) and still notching the gamewinner.

2) TIM HAND
For the icebreaker.

3) RUD IRAUSQUIN
For rejoining the Franchise in place of injured Gucci and getting the final tally of the evening.