(vol. 41W, no. 4; newsletter by b.n.)
I have lost all track. Of everything. It was what. Maybe a week ago and I have no memory of the game. I thought I had a pretty good memory of HARRIS ASKING. (I didn't mean to do the all caps thing by the way, but it kind of gives a nice effect so I am going to leave it ... Maybe Harris can cut it out if he doesn't like it.) Anyway, the “asking” thing had to do with Harris asking if I wanted him to write the newsletter, which I was fairly certain that I said yes. But I guess I didn't.

Anyway, it looks like the Pirates were losing after the 1st period by the score of 1-0. The final was 2-1 with the Pirates being the team with the one. That “one” (if you were wondering) was scored by Marty. And just in case you were wondering, there will be another game next week ... although we will have to do without the services of KennyG who is on “official business” the next 2 weeks. 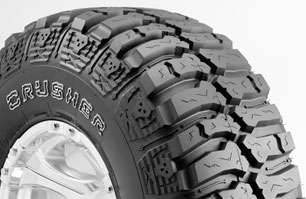 OFFICIAL TIRE OF THE COASTAL PIRATES
The Coastal Pirates have entered into an arrangement with Dick Cepek Off Road Tires, naming them the official brand of the Pirates Organization. This company makes a the “Crusher” tire (shown above) that actually has skulls-and-crossbones embossed into the rubber sidewalls. A perfect addition for your Escalade, Jeep or BMW. (Click to enlarge)

1) MARTY MACCANICO
For our lone goal.

2) BRIAN NEWCOMB
For a heads-up to give the goalie his stick and then ultimately blocking a shot without one of his own.