(vol. 42S, no. 7; newsletter by h.s.)
With an hour before gametime, Pirates were calling out by droves and if not for late substations by Marty and Miller, we would have been playing with a 7-man team — much like our opponents were. The early reports from Charlie Milo (or was it The “Head” Bubba?) had us favored going into this game, but the Jags obviously had something different in mind at the start ...

A failed clearing attempt on the opening shift and a stubborn #94 who called for the puck deep in our zone, resulted in a 1-0 Jags lead just :40 seconds into the game. It wasn't until 10:00-minutes later that Glenn (on an up-ice pass from #67), powered an unstoppable shot topshelf to tie things up 1-1. Although that was the only other tally of the 1st period, you could sense the momentum swing and the tired legs from the other bench. Other highlights of the 1st included, a play where Wildman was so confident he scored that he raised his arms in triumph ... but the ref must have been sampling a “Head” Bubba Slushie prior to gametime and missed the goal. Before the night was out there would be many posts, near-misses and refs yelling (in a World Cup-type announcer voice): “No Icccccccccccce!” ... for no apparent reason, since there is no icing.

After the break, the Pirates started coming in waves. Miller scored his first goal since his return from the I.R. on the opening shift of the final period. On the play, LeMatty had lined-up for the faceoff, but Scott raced to replace him; Moments later, Miller had the goal and the Pirates had their first lead. The work of The “Head” Bubba had begun.

With all the substitutions I wasn't sure where to play #67. As we know, he's good on the faceoff and less of a threat to us when he's further away from me (kidding). We ended-up having a trio of “D” with Brian-Nigro-Marty, and #67 assuring me that “he could score from defense.” With 8:40-remaining #67 made good on his words ... After being foiled by a few more near misses, it would be Brian who shot quick and low through a mass of bodies to give us the 3-1 lead. He'd follow that feat again on a Sony™ Playstation-type move where he was turned-around completely while the puck found the twine. When he came back to show-off his $32 stick that he used for these goals, I reminded him he was just one short of the hattrick. He told me, “Now you just jinxed it” ... and then he scored the next goal. This too had to be the mysterious workings of The “Head” Bubba.

Although #67 had the natural hattrick, the forwards did a nice job at frustrating the Jags as they chased down pucks and kept them from setting anything up for the second half of the game. Rud foiled many plays with his long reach and LeMatty came back to help out numerous times ... of course it never hurts having guys like Marty and Joe Nigro bolstering the blueline too.

So who is The “Head” Bubba? Well, after the game I came into the locker room and found Wildman and #67 surrounded by bottles of premium alcohol, courtesy of Charlie. Since Charlie doesn't drink the stuff, he gave Wildman a Curevo Tequila (which he mixed at the post-game “meeting” with Gatorade) and Brian a bottle of single-barrel Jack Daniels. As Wildman was finishing his first Gatorita, Bri noticed that his bottle was ratting so we opened it up and discovered it was signed by The “Head” Bubba and had special gold plates around the neck designating this bottle as one created for The “Head” Bubba. Out of curiosity I googled that the next day and (without too much effort) discovered that below is what The “Head” Bubba looks like. (You can click here if you want to see official website by the way). So in a very real way one could say that The “Head” Bubba was present at our victory and was there at the birth of “Pirate ParkingFest I,” that incidentally begins after our 7pm game this Wednesday. Everyone is invited 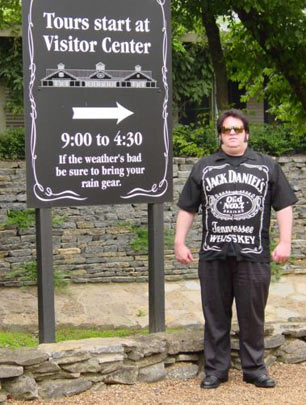 1) BRIAN NEWCOMB
For the natural hat.

2) SCOTT MILLER
For his first goal since his comeback from the I.R.

3) GLENN FARKAS
For a well-placed, topshelf goal that knotted things up in the first.