(vol. 42S, no. 8; newsletter by h.s.)
The last time the Pirates faced a no.1-team in this league, we handed the Lunch Ladies a loss. This time around — with the Bulldogs in sole possession of the no.1 spot — it didn't go as well.

After surrendering an early goal, Russ with help from Farkas knotted things up. (That only Pirate point would be critical as it gave Glenn a tie for most points with #67, and thus a tie for the Art Ross Trophy with Brian. The Richard Trophy, for the first-time in Pirate history, ended in a three-way tie as LeMatty, Farkas and #67 all had 4 goals on the season.) Back to the game ...

Unfortunately our tenacious play during the remainder of the period was spoiled by a flukey shot (with a minute remaining) from the “injured” Jay Serkin who was playing for our opponents. The 1st period ended 2-1 and that was as close as it would ever be again.

There's nothing good that can be said about the final 22:00-minutes, except that we didn't get mercied — which was pretty impressive if you take into account we trailed by seven goals with a healthy 6:00-minutes to play. Since there's nothing good left to write about this outing I'm just going to run this photograph of Wildman posing with a huge statue of french fries ... 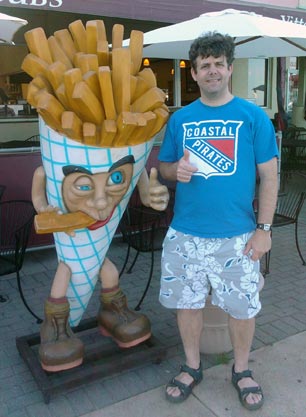