(vol. 42W, no. 1; newsletter by b.n.)
editor's note: The following email arrived to my cell as 14 separate text messages. It is the latest known filing of a game recap, coming 11 days after the actual game (which we won rather nicely btw although you wouldn't know it by reading the following)
Wow ... This is probably one of the latest newsletter filings .... Ever .... But then there is plenty of material to draw from .... Like Tony expecting to get a star for helping to cart #67 off the rink .... Yeah like that is going to happen (he was responsible for the condition of #67 after all ... ) and somebody asked me the other day ... What happened to Scott Miller ... I never hear about him in the newsletter anymore ... Did he move to Wisconsin or something? Well, actually no, Scott is still around ... But since I never actually write anything about the game ... He gets the short end of the newsletter recognition department. Not that I have ever heard him complain about it ... Not like Mike anyway .... I cant figure that dude out ... If I write about him ... He is not happy ... But then I do and he is not either. And then when I finally got him figured out ... He is a no show ... But then it turns out that i didn't have him figured out after all because where I THOUGHT HE WAS A NO show (sorry about the caps by the way) in actuality .. He is not actually on the team but instead plays on Sunday and is only filling-in on Wednesday ... Go figure .... (I may in fact have that backwards ... But he has got me so twisted up ... I don't know what to think ) but since I am thinking ... I can't help but think about the fact that the newsletter deserves better than this ... Like some accuracy. Well ... Then again maybe not ... how accurate so you want to get about a bunch of over-40 guys playing (and I put that loosely) in an over-30 league.

Did I forget to mention that there are no ice rinks in Bermuda? I tried to enlist some backers on a recent foray down there ... But they couldn't give a crap about ice hockey ... (the best line I heard was from the machine operator that I was trying to convince to invest ... He pretty much summed it up by saying ... “i will build your rink ... But NOBODY is going to skate on it” ... Come to think of it ... They didn't have Pabst in Bermuda either ... What a bunch of left-wing commies. . . . Or is it right-wing wackos? ... I am never quite certain ... Guess it depends who is currently serving as the head of the SOC. (It's not me by the way ... Not that there was any ever any doubt) a betting man would say it was Harris by the way ... And they may in fact be right .. . But i must also mention Russ ... Because not that I think he would ever want to deal with the bureaucracy of the SOC ... BUT HE IS ANOTHER ONE THAT (sorry about the caps again) never seems to get proper mention in the newsletter ... But he would be the first to say he could do without the charity recognition mentioned above. Well .. Make that the second ... KennyG ? Don't need to say anything. Eddie? ... Nuff said. LeMatty ... Gets plenty of mention. The refs probably get more recognition than Dave Matthews .. But he is fine with that. And the point of all the above? ... OTHER THAN SAYING (sorry about the caps again) that i wrote the newsletter ... There is no point. . Except to say that while there are no ice rinks in Bermuda ... There is at least one mini- hummer (really!). 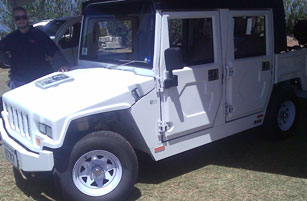 editor's note II: Right after Brian finally wrote his newsletter, the Captain was good enough to transmit his recollections from his BlackBerry™ while on travel.
Is now 1 am and I am just back to my hotel and I can barely remember this morning but I will try to remember the game. It was another Wednesday night league Monday night game with nearly a whole day's notice. The opponent was St Pat’s and our team was nearly intact then fully intact when Wildman found his way to the rink.

I remember the game having a nice pace early and was frustrated that we had missed on a few opportunites. We got our first tally as a rebound from a point shot went past Scott and I and drifted towards the blueline. I tried to throw blind behind the back pass to scott in front and it found the net. I later scored off my own rebound. We also scored an awesome top shelf goal.

Harris was stellar in nets and we simply went out and beat these guys.

Too tired for more.

2) ED GESIOR
For great defense, including numerous blocked shots. And also for not actually scoring on Harris even though he threatened to if we still had a shutout with 2:00-minutes remaining.

3) KEN GENALO
For a great set up to Gucci on our second goal and then a sweet tip-in for our third goal off a Dave slapshot.