(vol. 42W, no. 10; newsletter b.n,)
editor's note: #67 actually posted this Championship write-up in a timely fashion, but we wanted to tally the season's trophy voting results before we unveiled it. Without further adieu ...
According to Coastal Pirate historian Dave Matthews ... It's been a long time since the Pirates have won a Championship. When Harris reminded him that the Pirates celebrated their last Championship in October — the same night that the Yankees won the last World Series — he was uncharacteristically silent. And when the Pirates opened the game, it looked like we were going to wait longer still to celebrate another.

The Pirates opened the game pitted against some friendly faces: Tony Toscano, Jay Serkin. Meanwhile, the Pirates were minus a few faces. Other then the notables like Gucci and Scott Miller (who are out injured), Evan Miller was in attendance too .... but KennyG was nowhere to be seen. His replacement for the night Joe Nigro elicited a challenge to the roster, but after a short trip to the official sign in sheet, his official signature was validated and he was allowed to participate.

The Pirates sported lines of Russ-LeMatty-Matthews and Marty-Wildman-#67 on offense. On “D” was Mike-Kevin and Joe Nigro-Ed Gesior. And as I already mentioned, it was not a happy start for the Pirates, as it was the former-Pirate (who used to play for us on Sundays, but got hurt and dropped-off the roster), who celebrated his recovery by burying the first goal against the Pirates for the 1-0 Slick lead. The Pirates would answer back on the next shift though when Kevin picked-up a puck at the point and blasted it in for the equalizer.

It was really a pretty tight affair ... The now “legal” Joe Nigro would score next on a wicked wrister from the high slot (for some reason #67 was credited with the assist on this goal, but I am fairly certain that he witnessed it from the bench). We went into the break with a 2-1 lead, but Kevin still had to make good on two other goals he told the Slick's keeper he was going to score on him ...

Kevin would get his first of those on a nice deke on that gave the Pirates a two-goal cushion. The Big Slick would not roll over, though, and they would net the next goal to make it 3-2. Harris would stand tall in net and Kevin would restore our two-goal cushion with his promised third of the night, giving the Pirates a 4-2 lead with just over 5:00-minutes to play in the Title game .. And the Pirates would just about have it wrapped up.

There was still some excitement to be had however before the Pirates raised the Championship Trophy: On the ride home, #67 pointed out to #32 (aka son Dave) that all the Pirate goals were scored by defenseman — except for the last one (by #67 naturally). But before he could bask in the accomplishment, Dave blurted out: “Dad, it was an empty net." 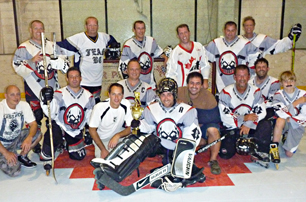 TEAM CELEBRATES 26th TITLE:
BUT WHO IS THE GUY IN THE MOUSTACHE?
Accompanied by three sidelined Pirates (Evan, Scott and Gucci), and an unidentified man wearing a moustache to the far right, the team poses for the victory shot after upsetting the No.1-ranked Big Slick. The win is the first 2010 Championship for the franchise.
Click photo to enlarge

1) KEVIN MCLAUGHLIN
For his second career hattrick in a Finals (yes, he's done this before).

2) JOE NIGRO
For the goal and for subbing ... but mostly for remembering to sign-in when he filled-in so he won the protest.

3) RUSS NICOLOSI
For captaining the squad to our first Title in almost a year.