(vol. 43S, no. 5; newsletter by b.n.)
editor's note: We found out that this game featured 22:00-minutes of penalties — tied for 3rd place all-time on the dubious list we track on the “Legends” page. Ironically No.2 on our list is another game vs. the Cannibals that had 26:00-minutes. Hmmm ...
In hindsight ... It looked like Sunday was going to be just another game ... Against the Cannibals .. Who in times past have given the Pirates fits. And unlike past affairs, the game was a tightly fought affair (whoops, didn't mean to say fought ... I wanted to leave that as the surprise for later, but oh well there it is — deal with it).

Anyway the Cannibals would land the first blow when they scored the first goal of the game. The Pirates, on the other hand, would be the next to answer the bell when they came out and scored on successive punches to make the score 2-1. Did I mention that Ed Geisor was called for a few penalties? (I didn't of course, but while he was in the box I learned a very valuable lesson).

So with that set-up you would think that Geisor would have been involved in the festivities at the end. You — as a frequent reader of this newsletter — must know by now that if you did, you were wrong. Instead it was LeMatty who got tangled up with one of the Cannibals. And this is where everyone in the building had a different perspective of what happened ... Suffice to say, there was a penalty called and I believe that it was for LeMatty for the high stick. But before tempers could settle down, Rockhill came in and somehow got involved with LeMatty. Before the ruckus ended both had been thrown out of the game ...

But the ruckus was not over: In true WWE fashion the disagreement spilled-over to the area behind the benches ... Even John Arena (who was not even playing in the game) ended up as a casualty when he was caught up between the two. The refs clearly had things under control at this point (they ran to the front desk and summoned Fred). Meanwhile there was a game to finish ... One minute left in a one-goal game. And after the long delay and all the penalties were sorted out (and at least one of the Cannibals went to the locker room for an unknown reason) ... You guessed it ... Another penalty was called ... And with the Cannibals already down to 3 skaters on the rink and their penalty box full ... There was no one left to go in the box ... Someone tried to coax the remaining Cannibal player out of the locker room to serve the penalty ... But he would not come out ... So that was it. Game over.

But the excitement would live on for at least another night. As luck would have it, the hockey gods were smiling and the rematch was on for the very next night ... To be continued ... 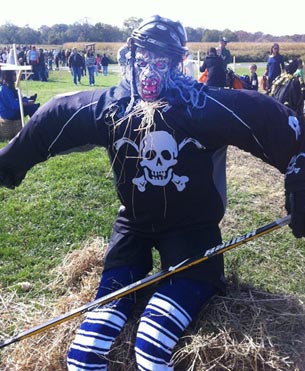 PIRATES WIN TITLE! WELL KINDA ...
Tony Toscano and his girlfriend Toni* entered the Scarecrow Competition at the Halloween Festival at Thompson Park, Lincroft. The couple created a Zombie Coastal Pirate and won 3rd place in the “People's Choice” category — so we can say that Tony actually helped the Pirates win something this year!

* this really is her name name and yes, we think it's really cute too that they are Tony & Toni.

2) GLENN FARKAS
For the first tally of the night and helping to set up the gamewinner.

3) JOE NIGRO
For his 2-point effort and arriving sober (even though his Giants played earlier that day).