(vol. 43W, no. 1; newsletter by h.s.)
The Pirates had little time to relish their recent Championship as the new Wednesday season began immediately ... the following Monday. The team was minus three starters for the season's first regulation game, but we made a valiant effort to ride the momentum of our 26th Franchise Title which was a result of a 6-game win streak (the final four regular-season games followed by an overtime Semis win and then a Finals victory against the No.1-ranked team).

Stepping in to fill the void left by Russ, Marty and KennyG, were Bobby Currao and Charlie Milo. Although Kevin is taking Brian's spot for the new season, Kev was called in to work at the last moment (thanks Glenn!), so #67 ended-up subbing for his own vacancy. (Is anyone following this?)

The final result of the night's hard work was a score the resembled soccer more than hockey. The Pirates were on the losing end of 1-nil loss, the only goal coming midway through the 1st period. We couldn't really generate too many opportunities on the evening and much of the play was fought inside our zone.

One of the few memorable plays on the night came in the last :15 seconds; With the extra attacker on the ice, Bobby had a last-moment shot from a poor angle and nearly knotted things up ... but the puck careened off the goalie's mask and the Pirates' bid for a perfect season was stopped before it began. 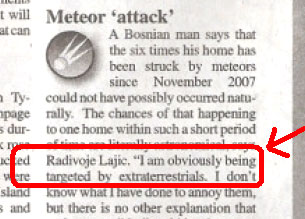 HE IS NOT ALONE
Oftentimes at the post-game “meetings” you will hear Pirates recounting #67's greatest newsletters, where aliens are mentioned as much as opposing teams. That's why #67 felt a bond with Radivoje Lajic in Bosnia when he saw the news article appear in a local rag. After Lajic's house was hit by meteors for the sixth time, he was quoted as saying “I am obviously being targeted by extraterrestrials.”

1) HARRIS
A belated Silver Skull thanks to Bobby's email after the original posting: “I understand we lost 1-0. but we only lost 1-0 because Harris stood on his head most of the game. my humble and real low on the totem pole opinion is Harris should get a silver skull for weds 1st game against the bruins. (and Im not humble often).”