That's how much time was on the clock in overtime when Ed Gesior dipsy-doodled past a defender and put a puck off the Jags goalie's shoulder and into the net. Until that point the teams had played more than 46:00 minutes of scoreless hockey and it looked for certain that we'd leave with a 1-point tie ... but we got the win instead.

To start the night the Pirates were down two regulars on the evening, so Joe Baio was brought in to to bolster the roster. That resulted in a rarity: an abundance of too many defenders. As a result we moved Ed up to center LeMatty and Dave “The Chiropractor” Matthews, so that the MGM line (Maccanico-Genalo-Miller) could stay intact. On defense we were left with the formidable trio of Kevin, Mike and Joe.

The Pirates owned the game early, but spectacular saves by the Jags goalie (including a glove off a Marty sure-thing) and a Jags 5-on-3 penalty kill, kept this knotted at 0-0 at the 1st break.

You could sense a shift midway through the final period as the Pirates were getting frustrated. The Jags began coming in waves and it seemed faceoff after faceoff was played in our defensive zone as the period went on. With moments left in regulation, the Jags were throwing pucks and bodies at the net and we were literally pushing downed players out of the crease.

After surviving that barrage we went into overtime where the Jags continued to pressure. On one clearing opportunity late in the 3:00-minute o.t., Kevin threw the puck up ice and found Ed. And the rest, as they say, is Pirate history ... 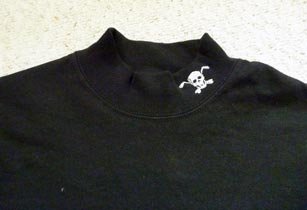 LAST CALL (REALLY) FOR MOCK Ts
Embroidered Pirate mock turtlenecks (just like the NHLers) are being produced. Wednesday members of the Championship team receive one for free, extras are $15 — makes the perfect present! (Specify size: Available Small through XXL)

1) ED GESIOR
For the gamewinner with :04.8 seconds remaining in overtime.

2) JOE BAIO
For keeping his promise and never letting anyone get by him.

3) HARRIS
For 47:00 shutout minutes and the assist on the gamewinner (since I told Ed to play up).