(vol. 44S, no. 5; newsletter by no one)
editor's note: Once again we have no newsletter for this game (just a few comments below). I do, however, encourage you to utilize the email link below that we have set-up so you can address your complaints directly to our Head of the Newsletter-Writing Division: PirateNewsletter.Complaints@coastalpirates.com

Here are some comments I received via email about this game: “Big team effort. First with a short bench the three D amigos and Frank held us in the game while our opponents were skating circles around us.” “Overall, a solid effort by the entire team. We were pretty pumped to have won!!” 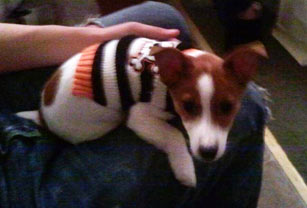 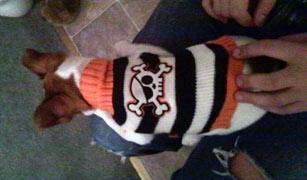 Gucci became the proud father of “Kash,” a 4-month old Jack Russell terrier, on Christmas Eve. As you can see, Kash Gugglelmelli (who Gucci says is a “psycho”) was promptly outfitted in Pirate-appropriate Winter attire. Congrats Gucci!

2) BRIAN NEWCOMB
For a sweet tally off a nice feed from Ralz.

3) FRANK NIKOLA
For a big “W” against a tough franchise.