(vol. 44S, no. 8; newsletter by r.n.)
editor's note: Another Capn's eye view of the game ....
The story of the night ... Farkas scores on first two shots; Farkas doesn't score on next 30 attempts. Poor Glenn Farkas was trying so hard to get the hattrick that he nearly blasted one through the glass, and looked like he pulled a muscle in his back fanning on a shot and then attempted to break a stick, slamming it in frustration. As Pirates Captain, I declare that a hattrick for Glenn is now four goals. The logic behind this change is that it will allow Glenn to relax, score the third quickly and then start pressing.

All of the Glenn stuff aside, the Pirates played a very solid game. Harris was efficient in the nets although he found a way to make a great glove save and score an own-goal on the same play. We even had a SportsCenter Top 5 goal scored by Charlie Milo: Charlie was the recipient of a pass from Brian after he stole the puck at the Jags blueline and then calmly skated in and did his best Gretzky imitation by making a little fake which dropped the goalie, and then he roofed one into the perplexed keeper's water bottle. 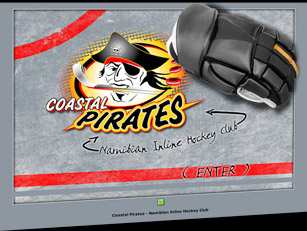 A PROPOSAL FROM THE CAP'N
In the last Wednesday newsletter I posted a correspondence I received from the Namibian rollerhockey franchise that bears our same name. What follows is Russ' email that he sent the team:
“Why don’t we seriously follow up with the folks in South Africa? I have never had even a twinge of desire to go to Africa, so don’t think this is some secret ploy to pursue a dream. Why don’t we reach out to these guys and see if they want to do an exchange program over a year or so. We host their players in our homes on the Jersey Shore arrange some tours for them and a little roller hockey. Maybe we chip in and put them all up at Scott’s during his off-season but when the weather is still decent like late September or October and then we go to their homes when they say it is the right time to go there. I think this would be something we could do as a group before we all get too old and hang them up. The Pirates are very special to all of us, Harris is departing for Maryland and the Good Sports leagues seem to be struggling to keep it together ... Gucci and I will do our best to keep us chugging along but we all really don’t know where all of this is going ... why not do something absolutely wild? John and Tim are world travelers; Dave and family have tons of experience. We can have Tim (nature) or Dave (water) arrange some type of adventure for us, it is English speaking (sort of) ... just seems like we should at least look into it! If folks are serious about considering such an arrangement, I will craft a formal letter and start correspondence. I will look at the cost and timing of doing this. This is certainly not about playing hockey and winning games; it is about the brotherhood of the Coastal Pirates here and abroad And playing hockey together. Any takers?”

[ the other coastal pirates / visit their site ]
[ cool, but where is namibia? / click here ]

1) GLENN FARKAS
For a pair of goals.