That actually occurred after the game that I am about to write about, but I can't help it. It's not like we live in New Hampshire. It's freaking New Jersey. I remember entire winters when it never snowed at all. But I continue to digress ...

Can you believe it is almost 2011? I can't. But you can't stop time. It continues to march on. And speaking of March, it has been said that sometime in March, Harris will be moving to Aberdeen, Maryland. What will become of the Coastal Pirates? I cannot say. Not because I know the secret and don't want to tell you ... more along the lines of I don't know. Who would update the website in the absence of Harris? (Certainly not me, I can't even write the newsletter.) And while we are on the subject of writing, let it be known that I was sitting around one day and out of the blue it dawned on me that this past Wednesday may be the last opportunity the Coastal Pirates ever had of winning the Championship with Harris in net. (Actually, I might have overheard Harris say that very thing, but in the interest of the newsletter I will pretend that it is my own original thought.) So as I am sitting there, the last 10 years have kind of scrolled before my eyes. Has it been 10 years? Yeah I guess it has been. (I still remember the first newsletter I ever wrote ... with footnotes! (Try to lay claim to that Tony!). Anyway, it dawned on me at some point, that other than my own personal satisfaction that I get after winning a Championship, it sure would be nice to deliver one more for the Gipper so to speak. And with that said, The Pirates opened their quest for their 27th Championship against the St. Bruins on December 22, 2010.

There is not much I can tell you other than: The scoring opened with #67 dishing a pass to Rich Trochiano for the first goal of the night. (I usually have the benefit of stats that are sent to me, but since I don't think that they were ever sent to me, there is not much I can can do.) After that ... somebody scored. (Not certain who ... or what team) and then ... after that ... somebody scored again. And as with the above, I am not certain who scored and in what order, but I can tell you that the score was 2-1 Pirates at this point in the 1st period. It could actually have been Pirates 2, St. Bruins 1, Refs 3 the way the calls were going, because even without Ed Geisor in the line-up the Pirates were getting the short end of the stick.

At this point I remember one of the big guns on the St. Bruins coming in the left wing and blasting a shot that rang off the right foot of #67. Ouch! He dropped like the sack of potatoes that he has been reported to be (or was it a head of lettuce? I can never be quite certain). But instead of laying there whailing away, #67 tried to get to the bench. It wasn't pretty, but he got there without stopping play (the St. Bruins did manage to score to tie the game 2-2 in the opening minutes of the final period ... but we won't blame that on #67 ... well ... actually you can blame him if you want). Anyway, Russ who was the center that stepped in to take #67's spot promptly blew out a wheel and he too went to the bench ... and sent out the hobbling #67 and what do you get? Not on obvious trip call (believe it or not, Tony said that he thought it had more to do with the fact that #67 was playing on one leg then the fact that the player from the St. Bruins hooked his leg and dragged him down in his own zone). Make that Pirates 2, St. Bruins 2, Refs 4 (I kid you not by the way, Tony actually said that). Anyway, they say bad luck always comes in threes so after the center position suffered through what seemed like a broken pinkie toe ... a broken wheel ... what else could there be? Sure enough, a broken stick was next on the hattrick of issues that befell the Pirate centers on the night.

But after that — and a Ref's call that finally went the Pirates' way — the tide had finally turned and the trouble that always comes in threes finally fell on the St. Bruins as the Pirates were able to reel off the final three goals (the final one an emptynetter by number “3”1) ... And alas, we won one for the Gipper. 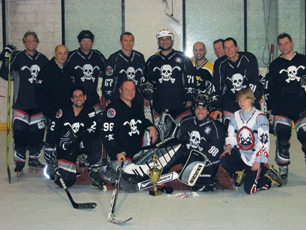 TIED WITH THE YANKEES!
No.27 WITH A BULLET
The Pirates looked like their old selves this post-season — rising once again from the bottom seed to win the Championship. As always we had to make it an even-greater challenge, as high-scoring center KennyG was sidelined with strep and Ed Gesior was suspended for the Finals. Fortunately the Pirate subs (our “volunteer firemen” of the team) were available on a moment's notice: Joe Baio and Rich Trochiano came to bolster the ranks along with Joe Nigro (who was filling-in for India-bound Wildman). 44:00-minutes later, the Pirate franchise had as many Titles as the New York Yankees. That calls for some Champagne ... like the kind #67 brought to post-game “meeting.” In a word, Yeehaw.
Click photo to enlarge

1) MARTY MACCANICO
Marty had a team-high 12-points this season, with 5 in the Playoffs.

2) SCOTT MILLER
For his 3-point night, including the emptynetter to seal the deal.

3) RICH TROCHIANO
For the GWCWG (Game Winning Championship Winning Goal). Troch subbed throughout the season and both our Playoff games.