(vol. 45W, no. 10; newsletter r.n.)
editor's note: The Pirates arrive in their second consecutive Wednesday season Finals where they once again face the St. Bruins for the Title. A win for the Men-In-Black would mean consecutive League Championships and their 28th Franchise Title. Our Cap'n (who has been on-board for the last 27 of'em) had a hat in the Semis. He filed this game report from the Turnpike ...
Pirates bid Harris a proper adieu with Championship masterpiece! A shutout may have been the optimal send off, but I believe a hard-working, grind-it-out win — typical of Pirates victories over the past decade — is the most appropriate salute to Harris.

As usual the St. Bruins played a clean hard game, but couldn't overcome the stellar keeping of Harris and the confident relentless attack of the Pirates. It was good to see some of the more tenured Pirates such as LeMatty, Miller, Nicolosi (goal, goal, three assists) contribute in such an emotionally significant game.

The game itself was tightly contested through the 1st period, but play was primarily dominated by the Pirates. Good goaltending and a number of near misses prevented the game from being lopsided at the half. The signature moment came halfway through the final period with the Pirates trailing by a single goal; a turnover at center rink lead to a breakaway that was confidently thwarted by Harris. Shortly thereafter the Pirates scored twice and put it away. Ed, Marty and Ken all had strong games and were rewarded for their efforts by having their names on the score sheet.

The joyous occasion was saluted via the usual team meeting and an additional jaunt to Pete & Elda's in Neptune. Special thanks to Jake and David Newcomb for their presence at the game and parties. 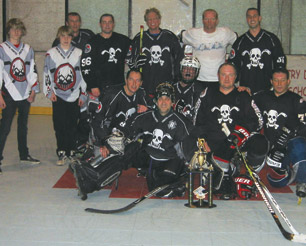 WINNINGNEST FRANCHISE ... EVER!
YANKS FALL TO No.2 WITH PIRATES' No.28
It's never seems easy, but the Pirates find a way to make it work. This time the road to the Championship was paved with first period ties and late rallies. In the end, the Pirates clinched back-to-back Titles and the first one in 2011 — which means they've won at least one Championship every year for the past decade.
Click team photo & trophy to enlarge

1) ED GESIOR
For the defense we've come to expect ... and the offense too.

3) HARRIS
For a post-season 1.5 g.a.a. in his last full-time Pirate appearance.