(vol. 45W, no. 5; newsletter by b.n.)
editor's note: Better late than never.
All that is old is new again. Or maybe it is still old. I remember Team Stihl from “back in the day.” And I really should know how to pronounce “Stihl” since I have bought a few of their gas-powered chop saws over the years. But I don't ... or at least I didn't until the other day. I know people have called it "Steel," but I as never really certain that that is the way it is pronounced. Since it had an “i” in it I kind of assumed it would be “still” or “st - hill, ”but apparently neither was right ... should have stuck with what they way everyone else was pronouncing it.

Perhaps that confusion clouded my mind prior to the start of the game. Or maybe not. Anyway Team Stihl was able to steal the lead early and build on it to make it 2-0. The Pirates battled back on goals from Wildman (from Eddie) and Russ (#67). It looked the Pirates were right back into it, but then the Stihl showed what they were made off and cranked a few more into the net. (It was 5 -2 at the end of the 1st period.)

The Pirates were able to score a couple more in the final frame (KennyG from Dave and Wildman from McLaughlin and Nicolosi), but Team Stihl were able to do the same to make the final 7-4. 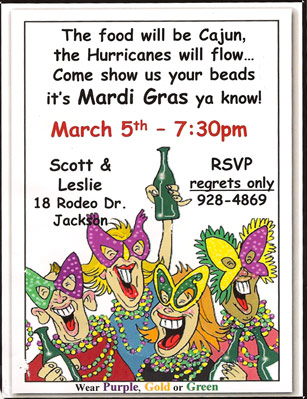 PAR-TAAAAY!
SAVE THE DATE: MARDI GRAS BASH
Here's the official save-the-date for Scott & Leslie Miller's Annual Mardi Gras Bash. We don't have to tell you that after PirateFest, this is the “social event of the season.” Don't miss it ....
Click photo to open large PDF

2) DAVE MATTHEWS
For the assist, but mostly for bringing the BTEC to the post-game “meeting.” (You can ask him what that heck that means exactly)