(vol. 45W, no. 8; newsletter by r.n.)
editor's note: Another Captain's-Eye view of the game.
The Pirates do their thing.
What is The Pirate thing you ask?

So the Pirates started by having a number of guys dressing and lines mixed- up. Hint. (Come late)

By the time we got folks fully suited and playing and lines all set up we were trailing 2-0. (Start Slow)

A hard-working goal by Dave off the net crashing of Scott L. and we started our comeback. At the midpoint it was knotted at 2 when Ken scored off a series of nice passes, the last being from Scott M. (Storm Back)

During the break conversation somehow avoided the killing of Bambi but also pretty much was about anything but hockey. (BS on bench)

The final period saw us have a number of good chances thwarted until Kevin snapped one by the tender. The final tally was a one-timer by Russ off a picture-perfect feed from Scott M. (Sometimes Win)

Just another day at the old plastic pond. 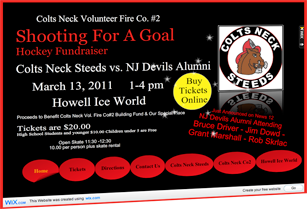 THE DEVIL IN MR. RUSS
Our Fearless Leader will be taking to the ice vs. some Devils alums this weekend. On March 13 at 1pm for only $20, you can go to Howell Ice World and watch Daneyko, Dowd, Driver, Marshall and Oliwa (to name a few) beat up on our very-own #99. Russ writes: “For those of the betting persuasion, the line is currently at Devils giving 15 goals, but I heard that might go up as they have been getting a lot of late money. Please dont let me catch one of these guys slapshots. If I dont survive it ... Ryan and Vicky get my sports cards. Everything else is pretty much worthless except Ryan keeps Grandpa Sabes chair ... I believe Roy is the Executor ... Kate will handle arrangements.”

1) DAVE MATTHEWS
For getting us on the board after a slow start.

2) RUSS NICOLOSI
For the final tally of the night and winning the ARt Ross Trophy for most points in the season (8).

3) SCOTT MILLER
For a couple of helpers.