(AP) Wall, NJ – The Newsletter Writers' Strike entered its second full-week and the Pirate website found itself without recaps of Sunday's and Wednesday's games.

“We're understandably disappointed that we have not found a way to amicably resolve the situation with the Newsletter Writers' Guild, but we will take action if it is not settled quickly,” a spokesman for the S.O.C. said.

The strike began shortly after the Landscape Solutions game when Bob “Brooks” Brooks never filed his newsletter after repeated queries. Brian “Pabst” Newcomb respected Brooks' strike and joined the N.W.G. picket line on Wednesday after he never filed a recap about the loss to the Geriatrics.

No one is sure exactly what the writers are seeking to settle this dispute. Numerous attempts to reach both Brooks and Brian were unsuccessful as neither answered phone calls or emails. 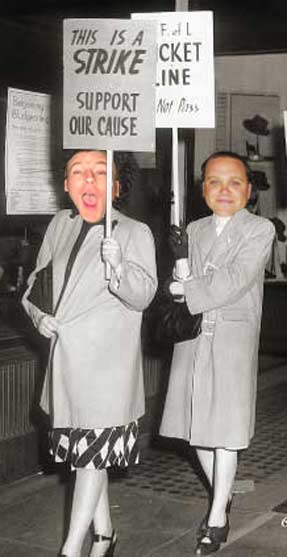 Members of the Newsletter Writers' Guild walk the picket line in front of GoodSports USA after the Sunday game.

2) GLENN FARKAS
For his SHG that seemed to turn the tide of the game.